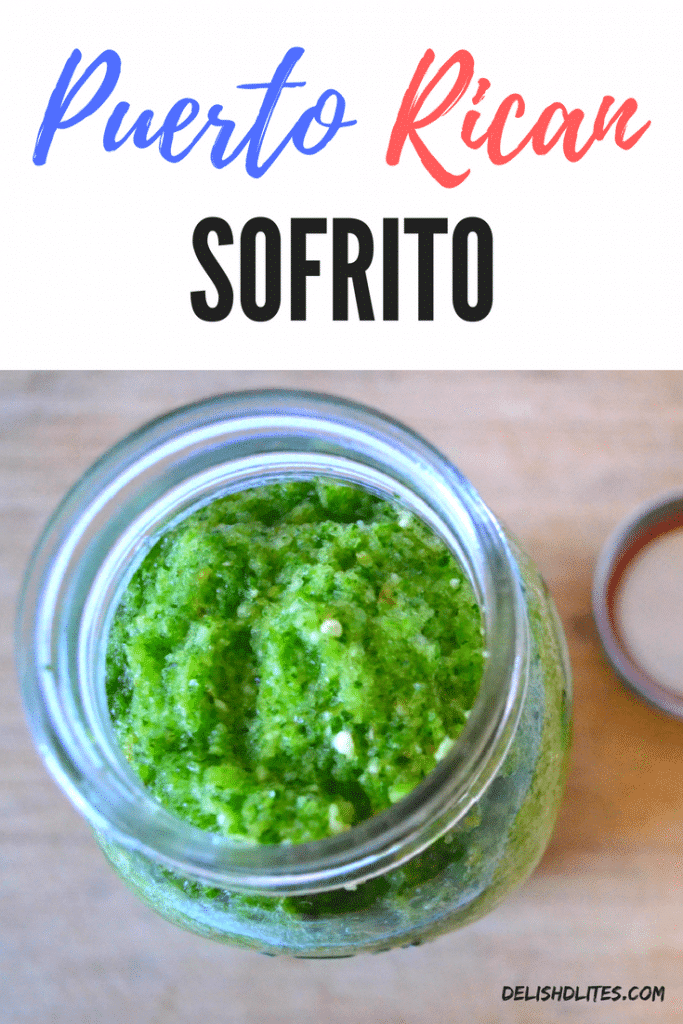 A Puerto Rican without sofrito is like a day without sunshine.  Ok, maybe I’m being a bit melodramatic, but there’s no denying the moment of panic that strikes me whenever my sofrito stash is running low.  Luckily, Puerto Rican sofrito is SO EASY to make, that 10 minutes of your time will yield you weeks, if not months, of flavor.  Akin to the mirepoix of French cookery, sofrito is the basis for many dishes in various Caribbean cultures, including stews, soups, rice and bean dishes.  Essentially, we use it for anything that’s cooked in some sort of liquid.  There’s some debate about what is and isn’t part of sofrito, and that answer will change depending on what country you’re referring to.  In Puerto Rico, we call it “recaito”. The pungent herb recao (AKA culantro) and ajíes dulces (sweet chili peppers) are the contributing flavor profiles to recaito. These ingredients can usually be found in Asian or Latin supermarkets. If you can’t find these 2 ingredients, substitute with cilantro and cubanelle peppers, respectively. 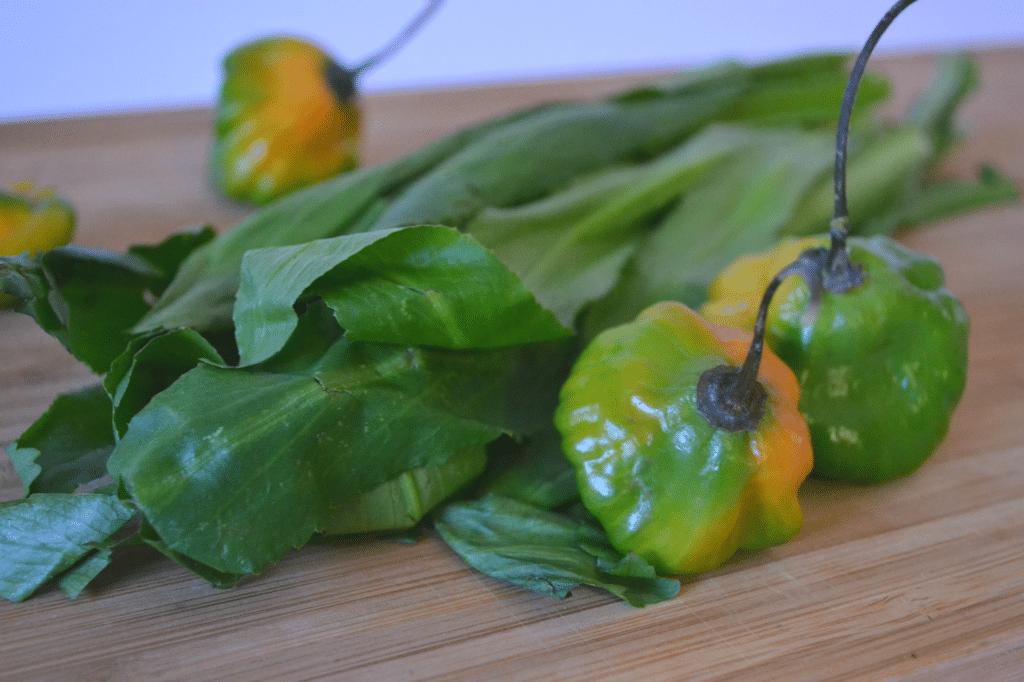 Dominican sofrito, called sazón in that country, uses vinegar for a flavor punch and annatto for color. Cuban sofrito employs tomatoes and red bell peppers to sweeten it up and add color, as well as diced ham.   So just to be clear, we’re making recaito!

Wash and prepare all the ingredients for the food processor (or blender). For the peppers, this means de-stemming and de-seeding them. Chop the onion into chunks, and peel the garlic cloves. 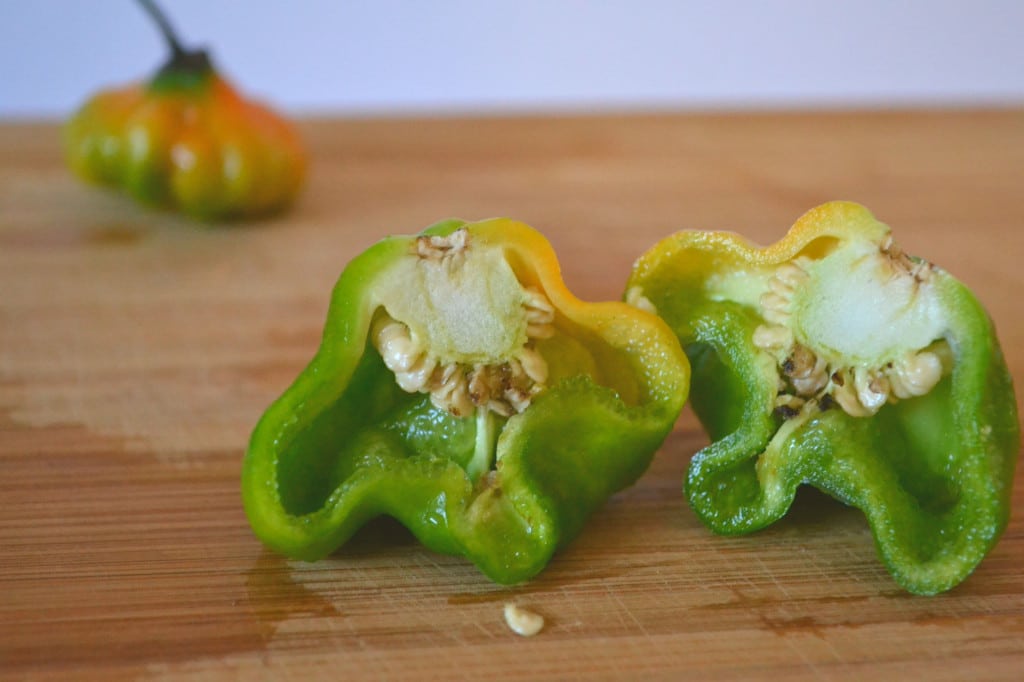 Add everything into the food processor (or blender).  If using a blender, you may have to add water to get the veggies to blend.  You can strain the liquid after blending so that the sofrito doesn’t end up with too much liquid. 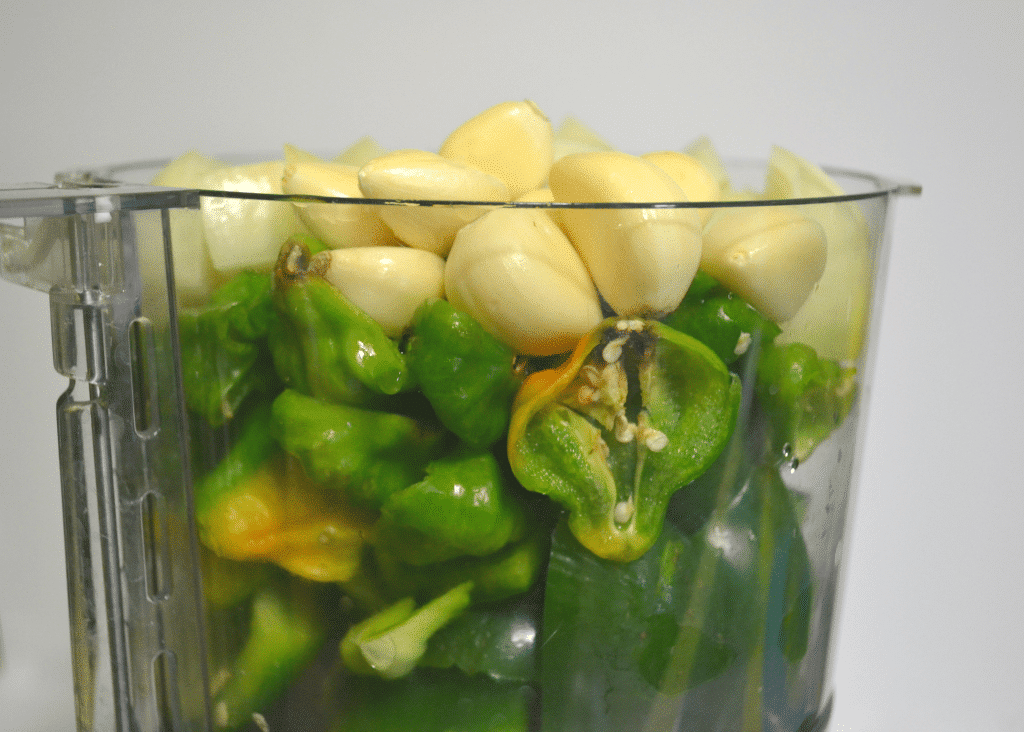 Blend until everything is finely pureed. 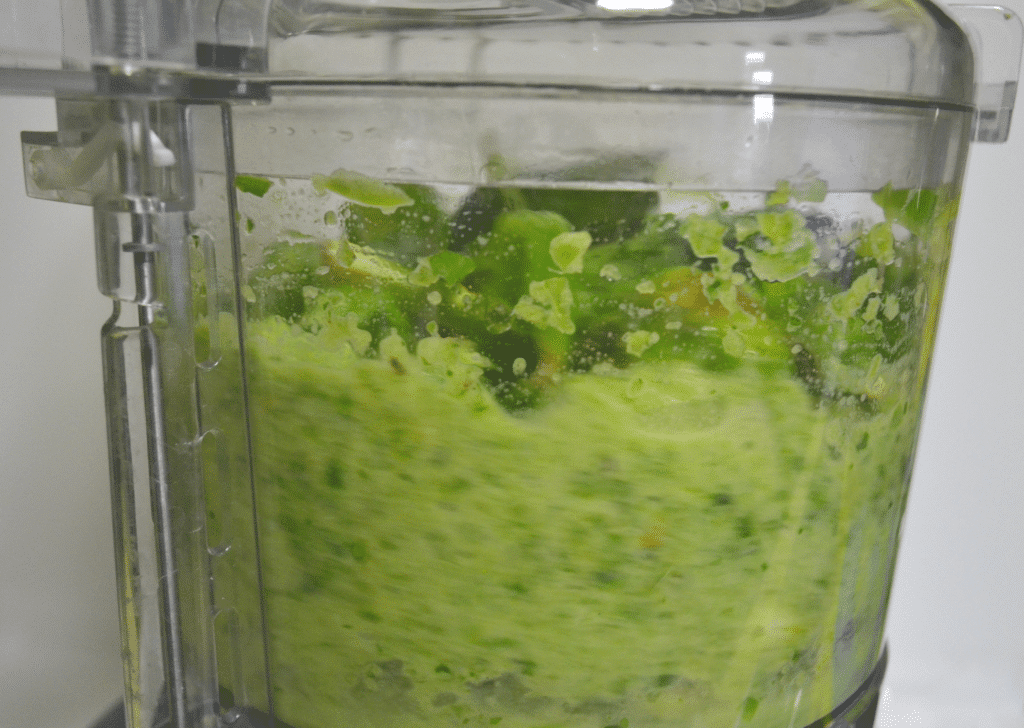 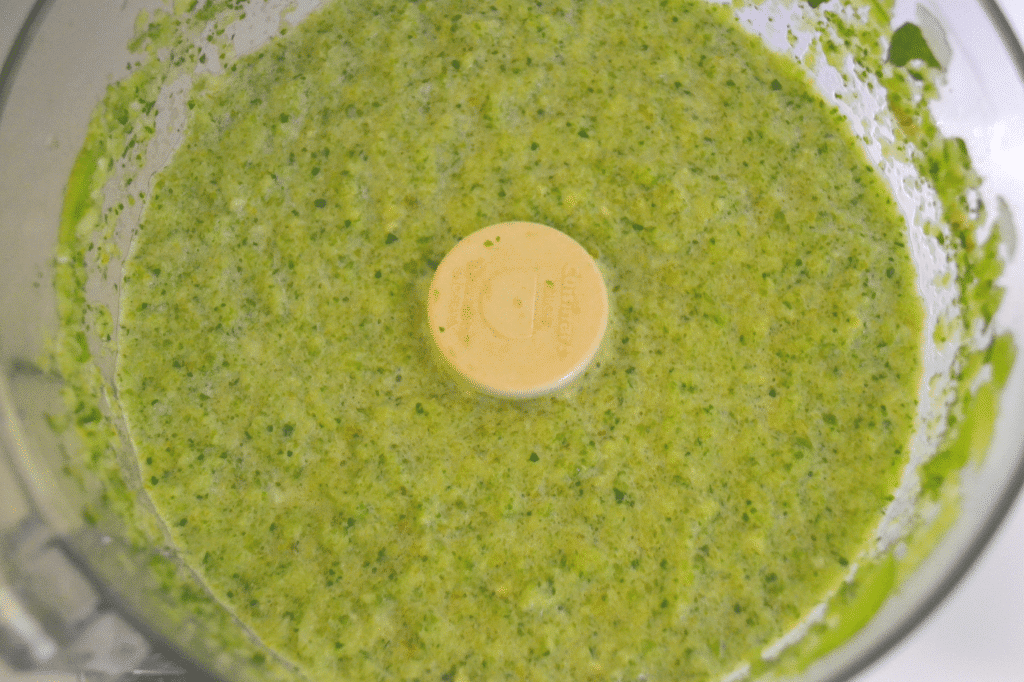 Use a funnel to pour the mixture into a storage container.  If storing long term, pour the sofrito into ice cube trays and freeze the sofrito.  Then just pull out a cube whenever you need it for a recipe. 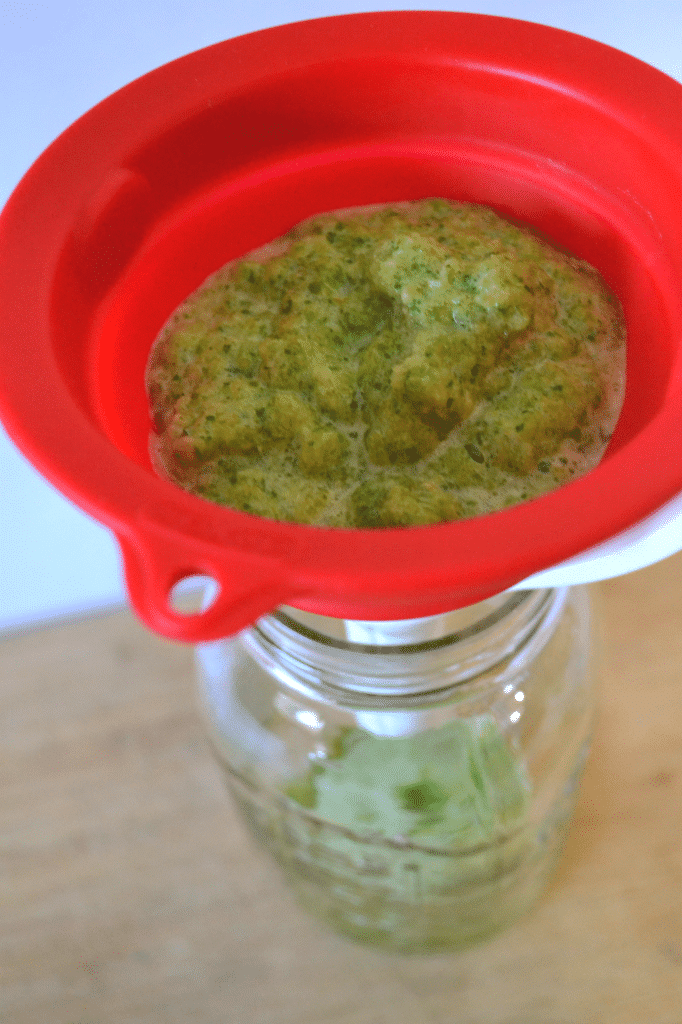 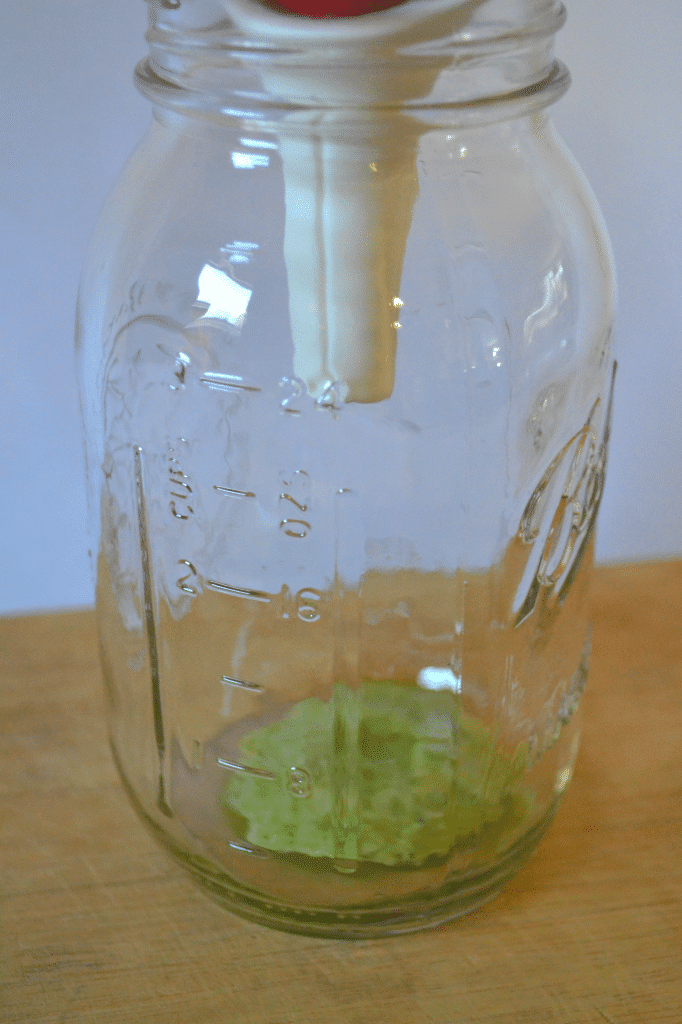 Use a few tablespoons in your next rice, beans, stew or soup recipe!

Recipes that use Puerto Rican sofrito: 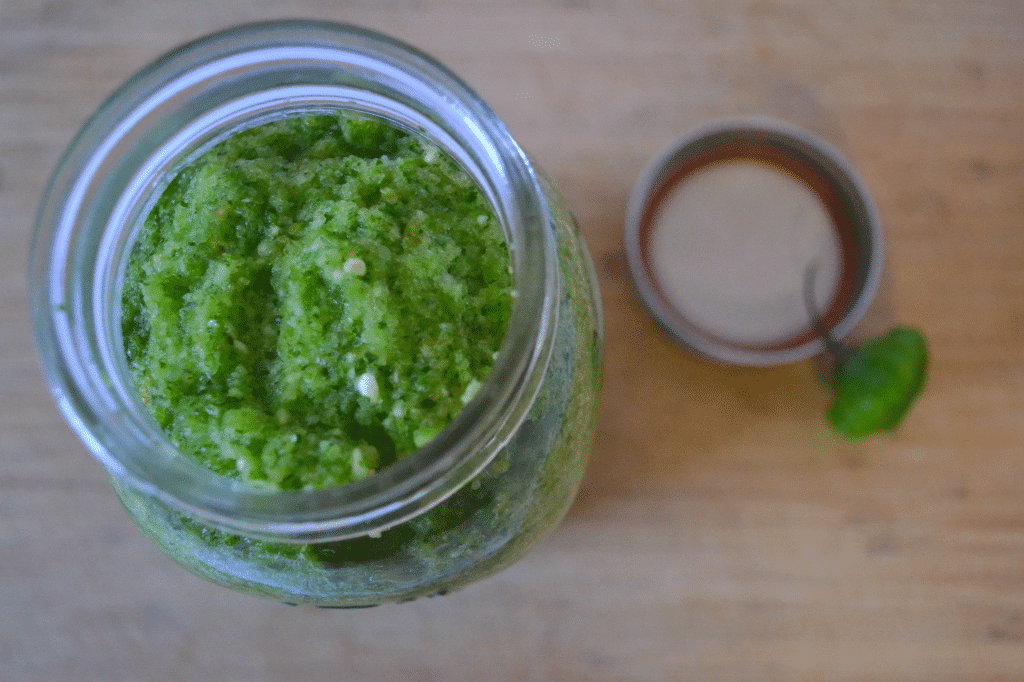 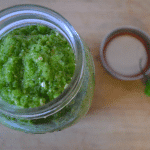 What does a “bunch” when referring to the recao exactly mean please???

Recao is sold in bunches or bundles like cilantro and parsley, so one of those.

Many of these ingredients are coming from my garden so I guess a bunch is a handful?

Yes the beauty of sofrito is that you can’t mess it up.

This was soooooo good. I roasted a chicken, rice and beans last night. I used the sofrito in the rice and it was so good that I added it to the beans and dipped my chicken in it. This is my new gravy! Thank you so much for the recipe. Can’t wait to try more of your recipes.

[…] pretty much wing it but if you want a recipe, Delish D’Lites has a simple one to follow so […]

PS: Do you have a good recipe for pastelon?

I have made a few of your recipes for my family they have loved them all. I have cooked Puerto Rican food for 22 years as my hubby is Boricua. But your recipes add a little change and it’s all been delicious. Thank you!

[…] and opting out of the spiced yogurt this time) Mango Salsa (As both a side and to bake chicken in) Sofrito (A quick homemade flavor boost, much like the herb oil we all love. Needed for the Rice) Puerto […]

first of all I love your blog! Second of all, thank you for posting this! I grew up in NY and though I am not Puertorican, I was brought up by a Puertorican Trini family. Every year I would get sofrito in a container for xmas that I would keep in the freezer. Now that Im in Louisiana I don’t get the sofrito anymore and wanted to make some to go with the pernil I’m making for thanksgiving. Thank you so much! Making tonight!

I can’t find culantro locally. Any ideas for a substitution?

LOVE LOVE your site, refer back to you all the time. I need YOUR version of adobo seasoning. I have a huge urge for what I called “Cuban meat pies” as a child growing up in Miami. I’m making the sofrito today but my homemade adobo tastes extremely salty…do I have it right?

Adobo is very salty on its own. Use just it like you would use salt. Not too much, a little goes a long way.

Is there a way to do this if you don’t have a blender or food processor?

Hi Marc, only other thing I can think of is using a mortar and pestle or chopping the veggies really small…

I am sure this is a silly question but of all the peppers in the world I cannot eat bell pepper . I have never found a substitute, can you think of one?

You can use Italian sweet peppers, cubanelles, or even poblano peppers.

Please help! I went to 2 different markets (a Latin market and a chain market) and I could not find cubanelle peppers nor ají dulces.
What other kind of pepper can I use?

Bell peppers are a good substitute

Translated to “little sweet peppers”, they’re the little peppers pictured in the blog post that are native to the Caribbean. They can be found in Latin or Asian supermarkets, or can be substituted with cubanelle peppers.