This shop has been compensated by Collective Bias, Inc. and its advertiser. All opinions are mine alone #40DaysofFlavor #ClamatoFlavor

I have to admit, I had no idea about not meating eat on Fridays during Lent, until I met my husband. I wasn’t raised in a particularly religious household, but my husband grew up Catholic. I’m talking baptism, communion, Sunday school, the whole thing! We met in college, and start dating in January. Soon after, Lent followed, and we were planning a date night. I suggested a burger place. He looked at like I was nuts. I quickly got the 411 on Catholics and Lent!

Catholics are required to abstain from eating meat on Ash Wednesday and each Friday in Lent (including Good Friday). Fish is often used as a substitute for meat-based meals. Historically, since about the second century of Christianity, Christians abstained from eating meat on Fridays as a kind of sacrifice and reminder that acknowledged Jesus’ sacrifice on the Cross, which we commemorate on Good Friday. About a century or two later, Lent came into being, as a season of intense preparation for Easter, so the fasting and abstinence was extended to much of Lent.

Since we’ve been married (OMG I can’t believe it’s going to be lucky number 7 this year!), Lent has become a time for me to spent time with my husband and my in-laws, reflecting on our blessings and our flaws, so that we can be renewed and grow together as a familia.

I love hosting Friday night meals during Lent, and of course, I’m in charge of la cocina! So when I’m going shopping for Lent recipes, you know I’m heading to Walmart! Their amazing selection of fresh ingredients, and kitchen staples like Clamato® Tomato Cocktail and SeaPak Shrimp Scampi, I can make this delicious recipe for super fast and easy Camarones Enchilados in no time!

My Cuban Style Shrimp Creole features a creamy, tangy tomato sauce that uses Clamato to accent the tomato and seafood flavors in the dish. The broth gets an extra punch from Latin staples like sofrito, adobo and sazon. Finally, the addition of the SeaPak Shrimp Scampi gives this dish an amazing garlic and butter flavor that is deliciously decadent, yet so easy to put together! The sauce is sooo good! I like dunking bread into it, or eating with white rice, which is super traditional.

This recipe is inspired by my husband’s hometown in NJ. He grew up in a predominantly Latino city, which is home to a large Cuban population, and lots of affordable, yet utterly delectable Cuban restaurants. When we were young and broke, we’d pop into one of our favorites, and Camarones Enchilados was always my go-to order. This dish tastes just like home, and I love being able to make it whenever I want, with the help of Walmart and Clamato! What’s your go-to Lent dish? Comment below, and check out more Lent-friendly Clamato recipe inspiration here! 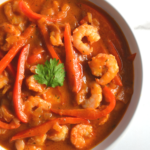