So I’ve come to the conclusion that I was a resident Baltimorean in another life.  The city affectionately known as “Charm City” captured my heart about 6 years ago, and hasn’t let up since.  I cheer for the Ravens & Orioles, and even got my Masters from Johns Hopkins.  And did I mention the food?  The city definitely has a permanent spot on my “favorite things” list. 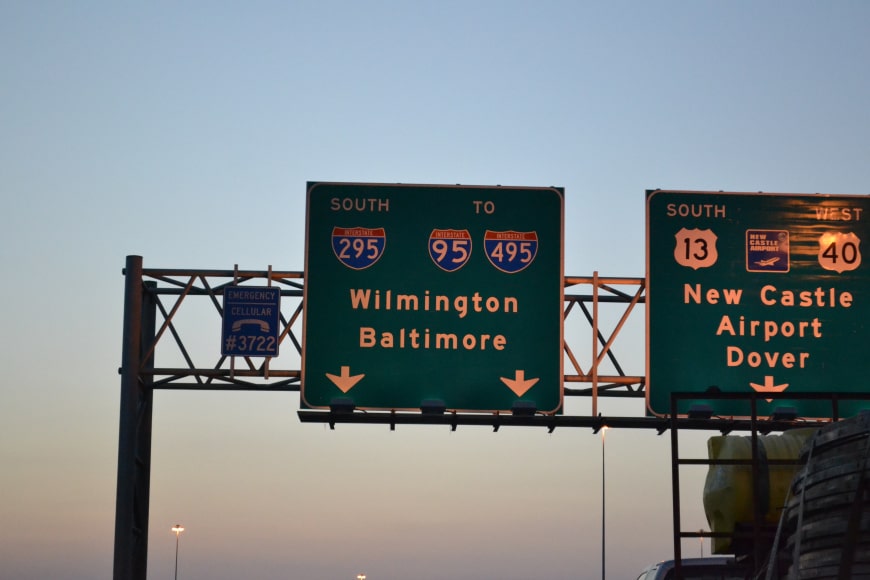 Baltimore gets a bad rap for being a city without much going for it, but that couldn’t be further from the truth.  Yea sure, there’s obvious signs of poverty, neglect and urban blight, but what major city doesn’t contend with that? (Yes, Philly, NYC, Boston, Chicago, L.A, Detroit, Newark and more, I’m talking about all of you).  I was born and raised in New Jersey, a state that knows all about extremes when it comes to social, cultural and economic disparity, so for me, Baltimore’s many faces are quite familiar.  And they’re all beautiful, and humbling. 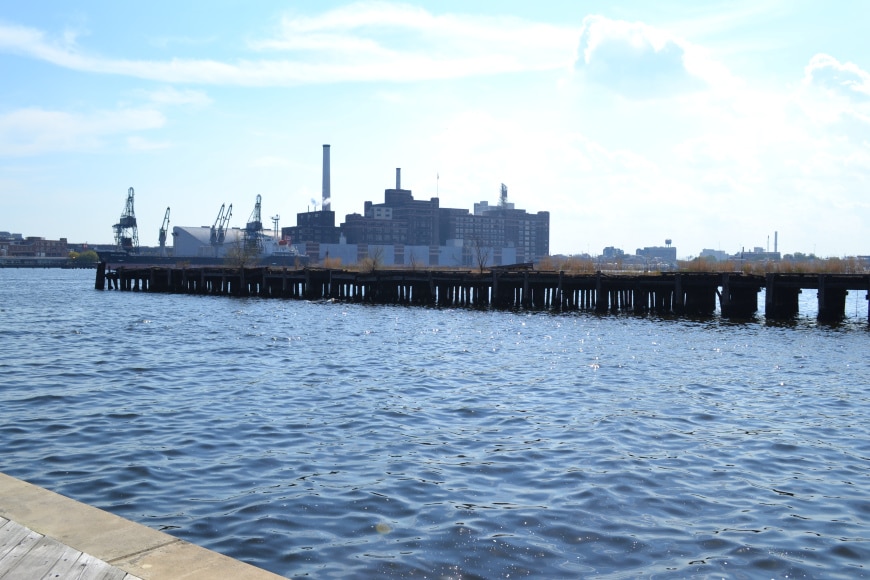 So why did I become such a big fan?  Well, it all started during one random October weekend, when my hubby and I decided to take a road trip to Baltimore, and we stumbled upon the most amazing street festival I’ve ever seen in the Northeast.  We’ve been making the trek every first weekend of October since. 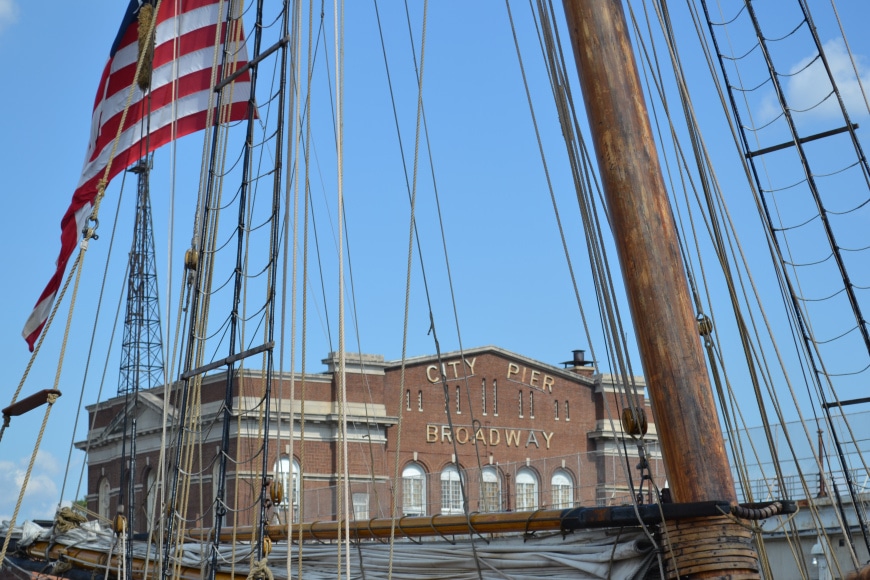 The Fell’s Point Fun Festival is a Baltimore tradition dating back to 1967, when the Preservation Society was founded.  This non profit group stopped the proposed extension of I-95, which would have leveled the Fell’s Point area. They successfully lobbied to have the Fell’s Point maritime community listed on the National Register of Historic Places and to this day, the Preservation Society has worked to maintain the 18th and 19th century character of the community’s historic structures.  Cobblestones still line all the streets, and you definitely feel like you’re stepping back in time when you’re there.  It’s amazing. 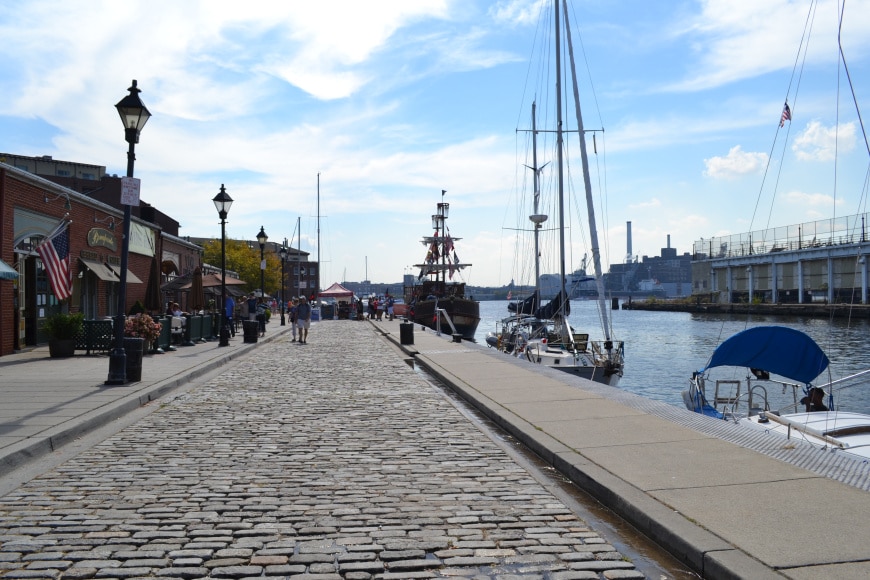 The Fell’s Point Fun Festival is held every October, on the first full weekend of the month.   The festival grounds form a T-shape, running parallel to the Chesapeake Bay, along Thames Street and intersecting at Broadway.  There are several different sections to the festival map, including arts and crafts vendors, vendors selling typical fair food, a Latin American vendor section selling all types of worldly delights, and more.   If you can’t find something delicious to eat here, well, you probably don’t eat much, and I will silently weep for you. 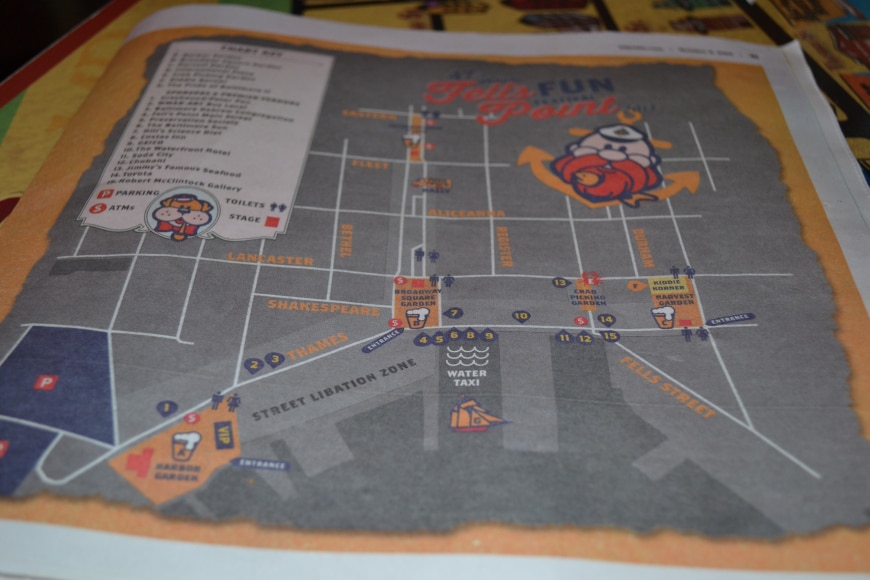 Another unique aspect of the festival is the open drinking policy.  If you’re idea of a good time includes imbibing in various beers of choice, then you’re in luck.  Pay $2 for a wristband that verifies you’re of legal age, and $5 for each refill.  You’ll get a specially designated festival cup, that entitles you to drink out and about anywhere within the festival boundaries.  It’s a pretty awesome concept.

Now onto the food.  THE FOOD! Some advice, don’t eat the day before. Seriously.  Just take a look at the variety below. 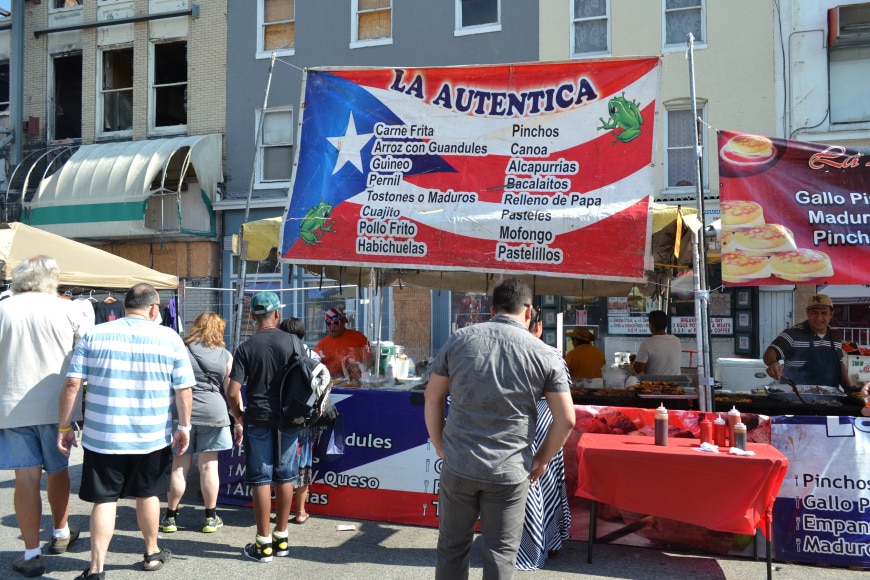 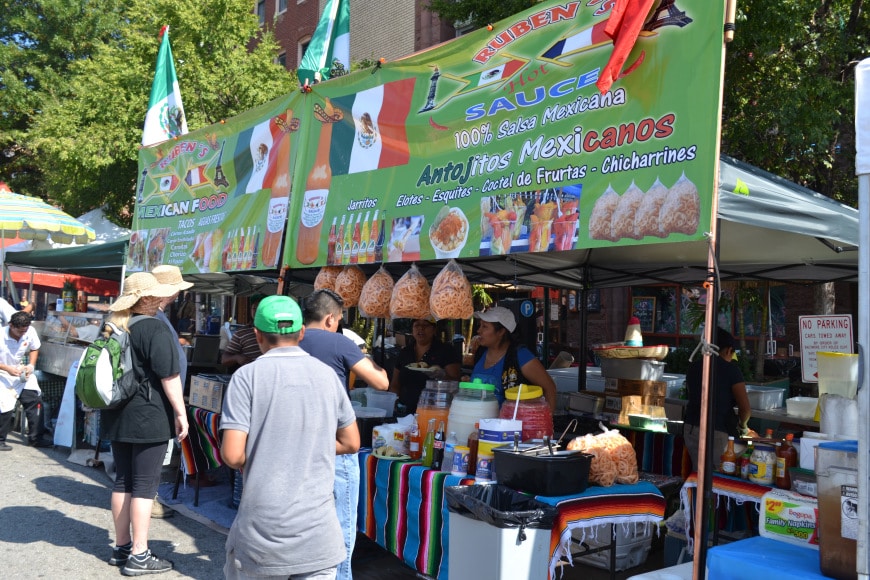 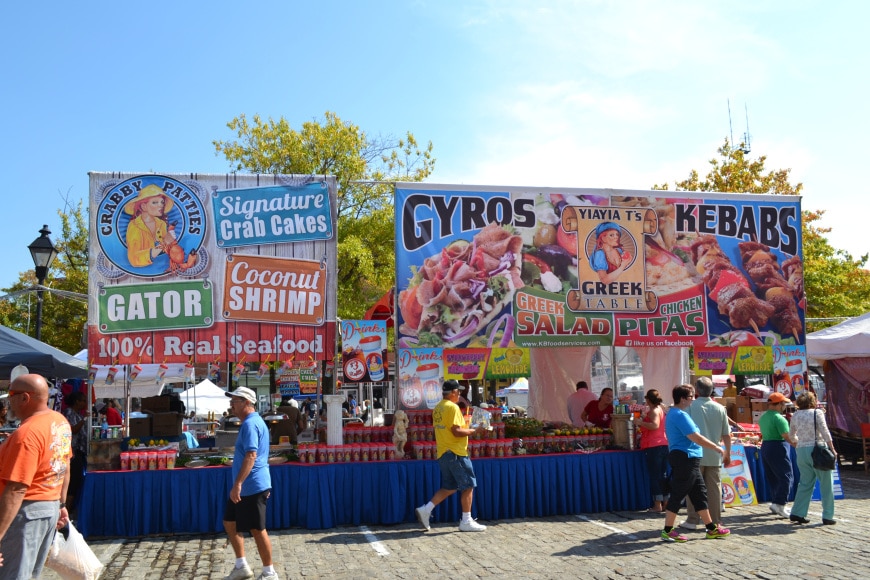 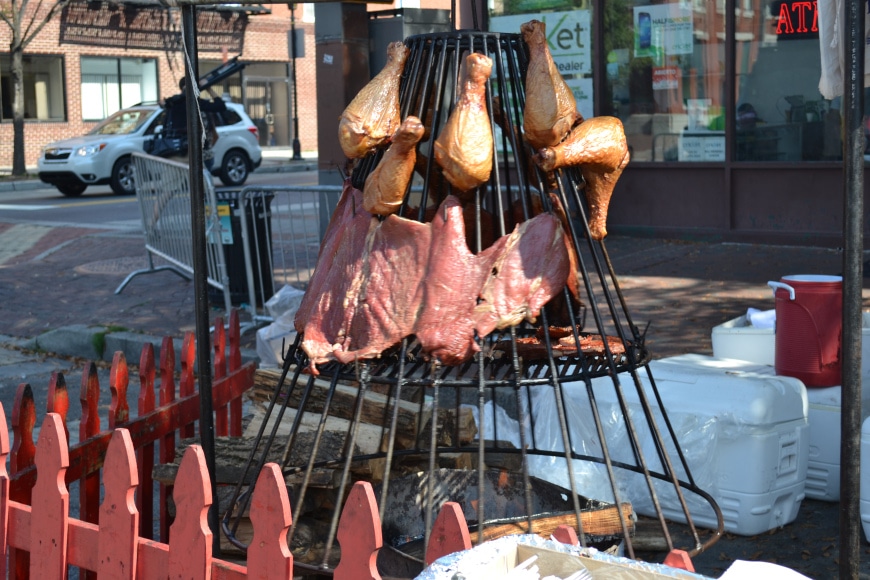 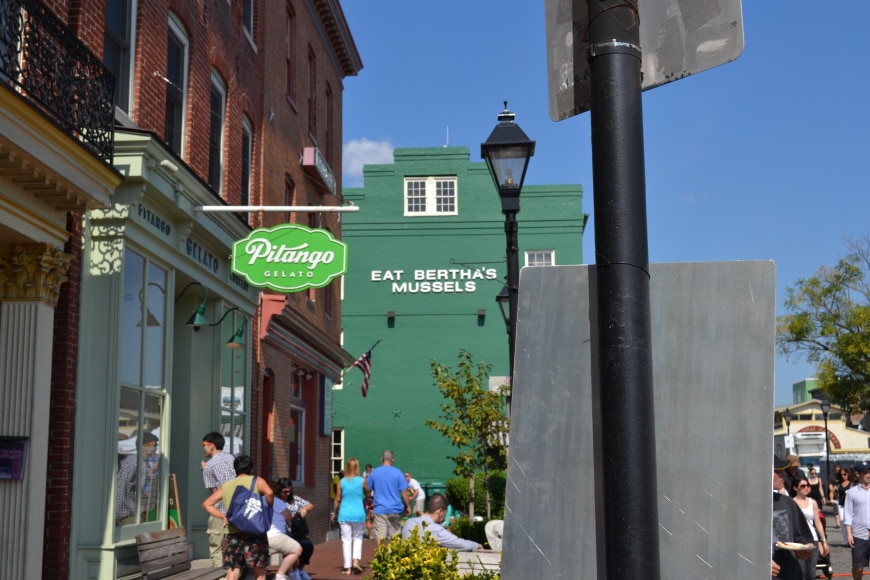 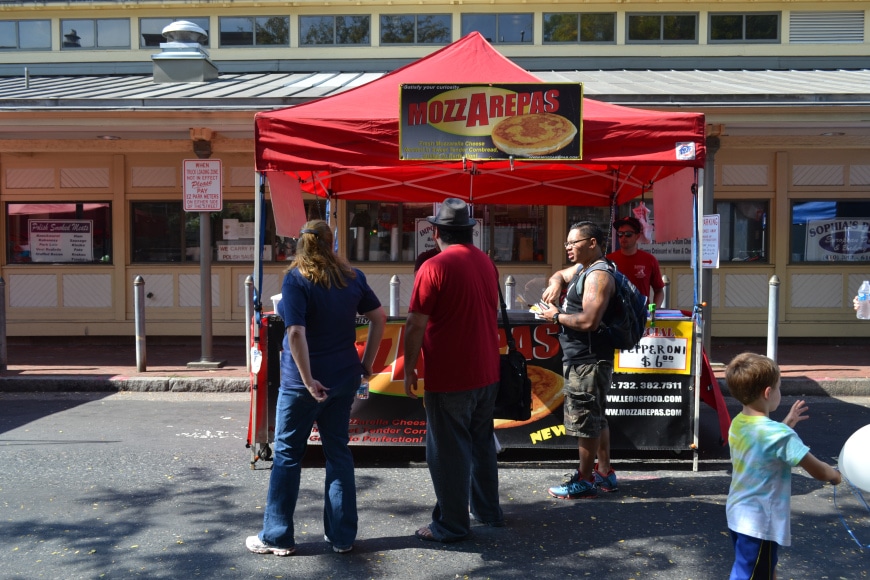 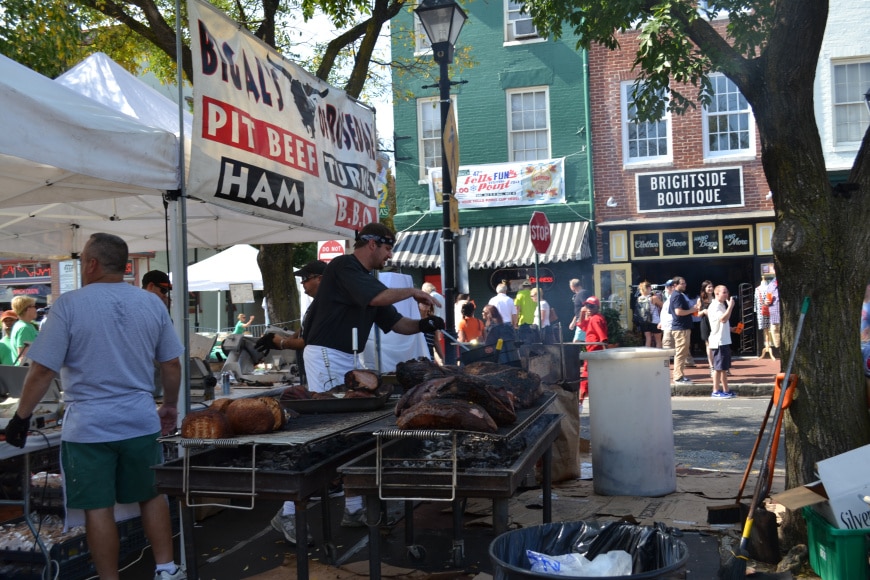 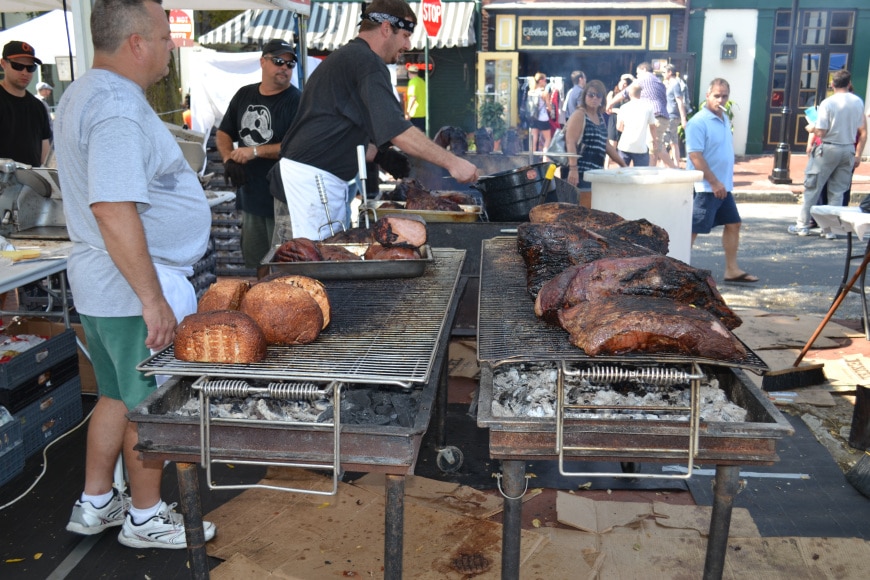 So yeah. Like I said, you won’t go hungry.  Promise.

Now, anyone who knows me, knows I can eat.  I may have been a competitive food eater in another life as well.

Some of the weekend’s best Delish D’Lites included:

Empanadas from La Authentica Food Stand.  These babies were LEGIT. 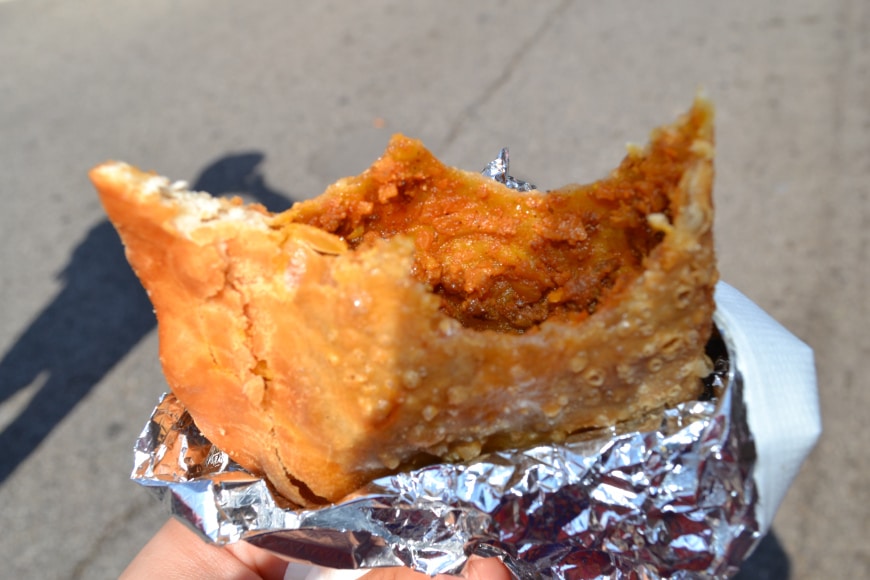 These things make grilled cheese sandwiches look like amateur stuff.  A griddled sweet corn cake filled with ooey, gooey mozzerella cheese.  Seriously.  See that look of annoyance on my husband’s face as I ask him to pose for the camera? That’s what happens when you get between a man and his mozzarepa. 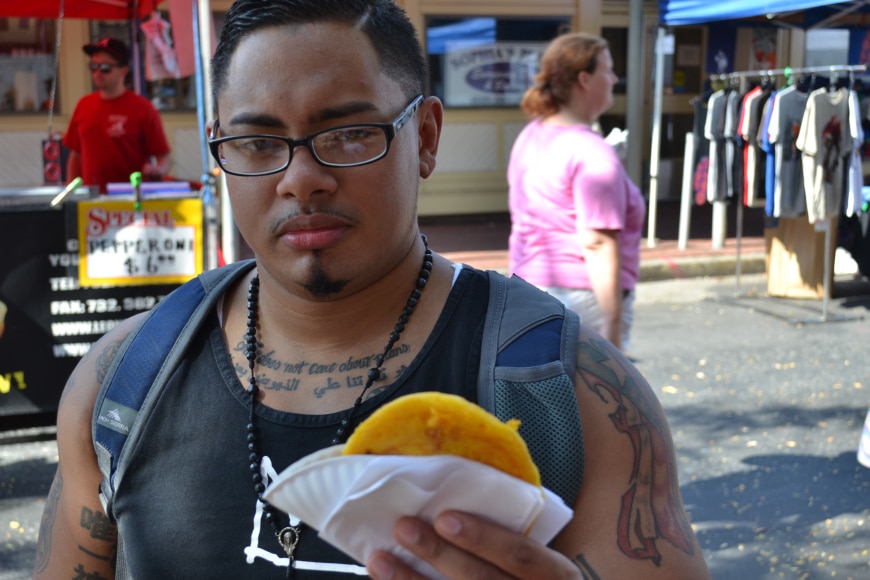 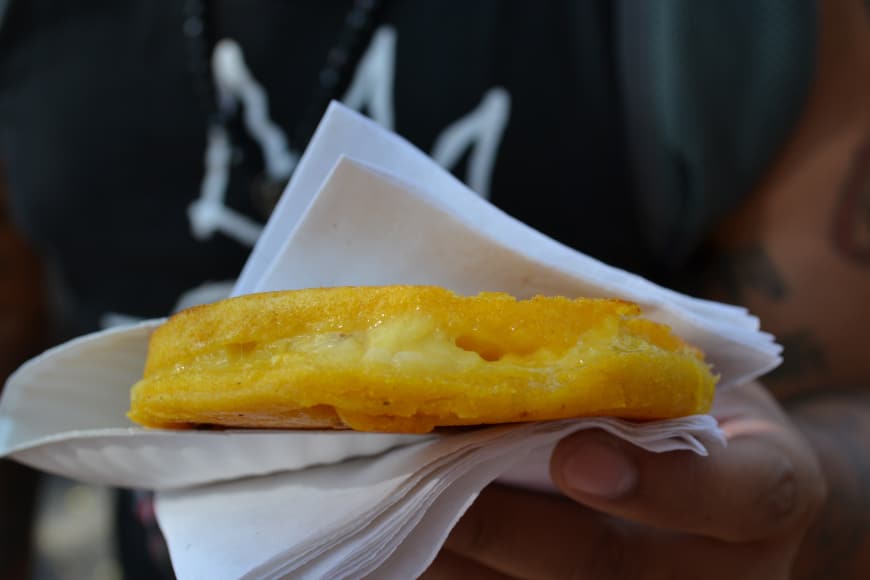 If you don’t have a crab cake (or 5) while in Baltimore, well, we just can’t be friends. 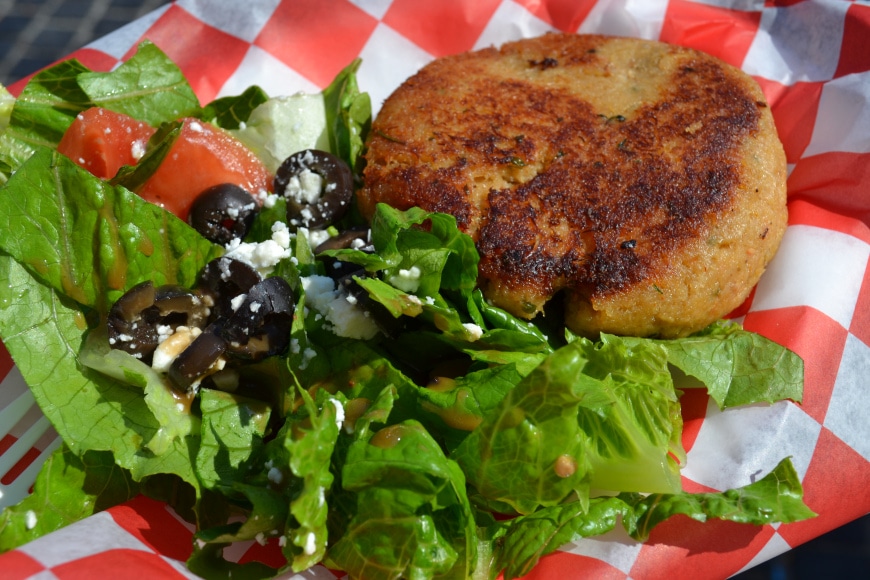 Say the word “alcapurrias,” and most Puerto Ricans think “beach food.” These scrumptious fritters are usually made with a batter of taro (yautía) and green bananas (guineos verdes), and are stuffed with either a meat filling or with crab, shrimp or lobster. These are so hard to find, I usually can only have them when family makes them, so I was definitely on Cloud 9 when I found them at the festival. 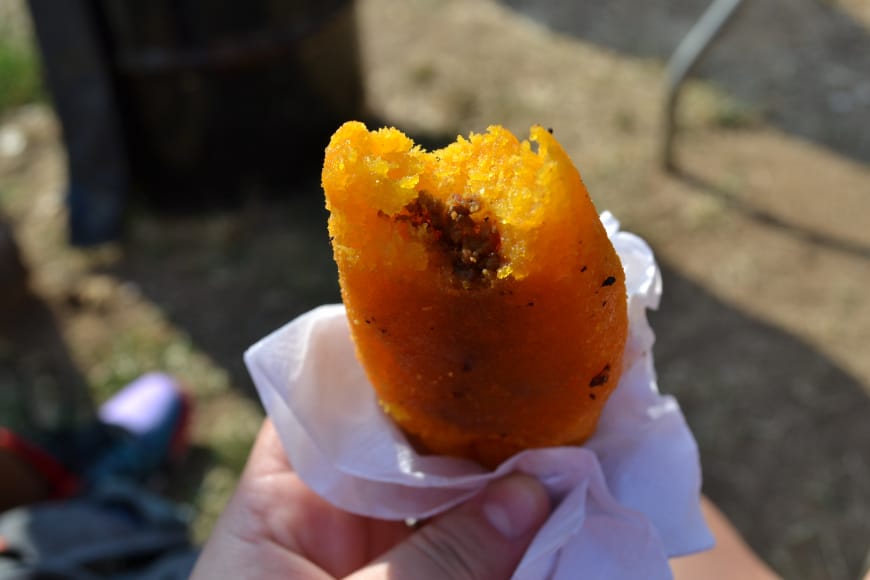 BOP is rated amongst the top pizza joints in Baltimore. It’s even been featured on Food Network’s Diners, Drive-ins and Dives! With over 50 different toppings to customize your pizza, I can see why it’s such a hit. 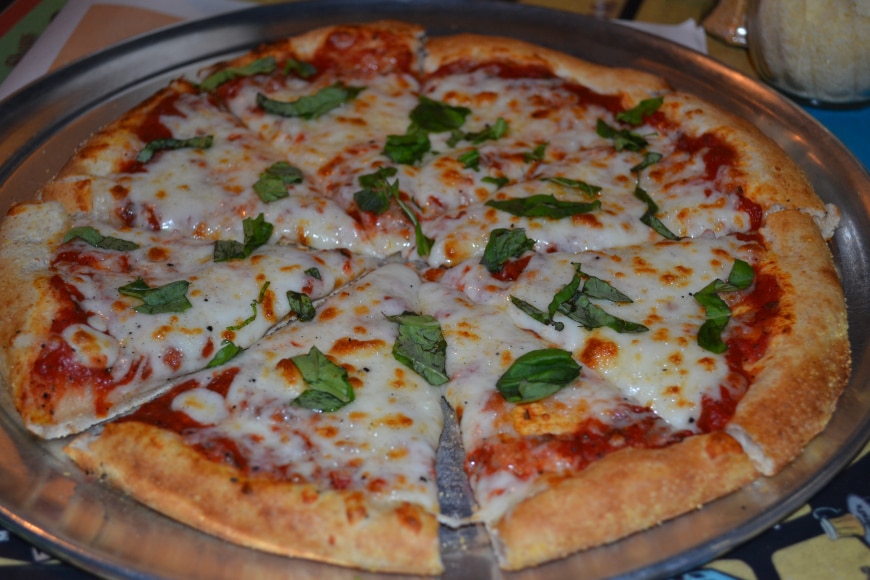 This place is a must every time I visit Baltimore.  Their selection changes throughout the year, and is always ingredient driven.  I had the passion fruit and rhubarb sorbets, and they were heavenly.  The pistachio is a rock star, too. 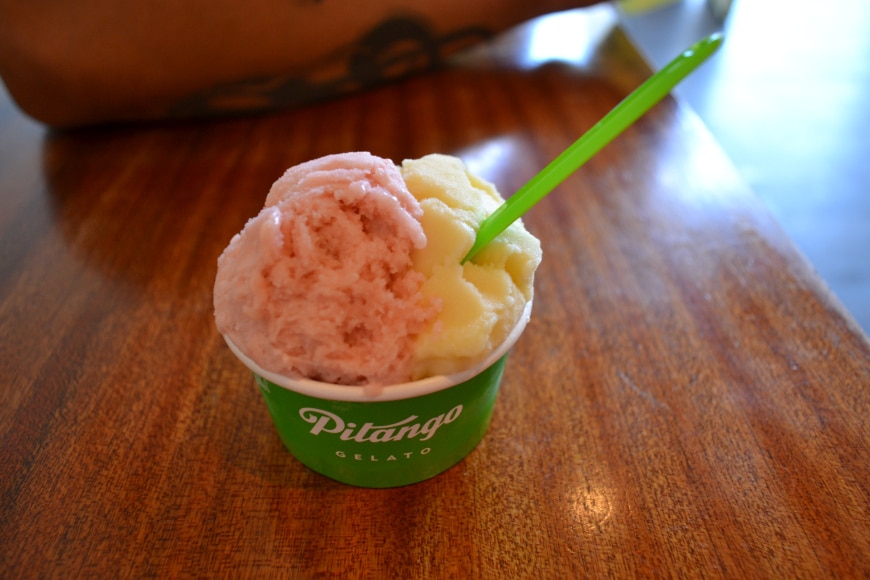 These aren’t your run of the mill Tex Mex tacos.  These are straight up, authentic, tacos, just like the kind you’ll find in Mexico.  Grilled meat, onions, cilantro, hot sauce, corn tortillas. That’s it, folks.   I tried the carne asada and the Al Pastor tacos.  Almost melted my lips off with the homemade habanero hot sauce, but damn, it was good. 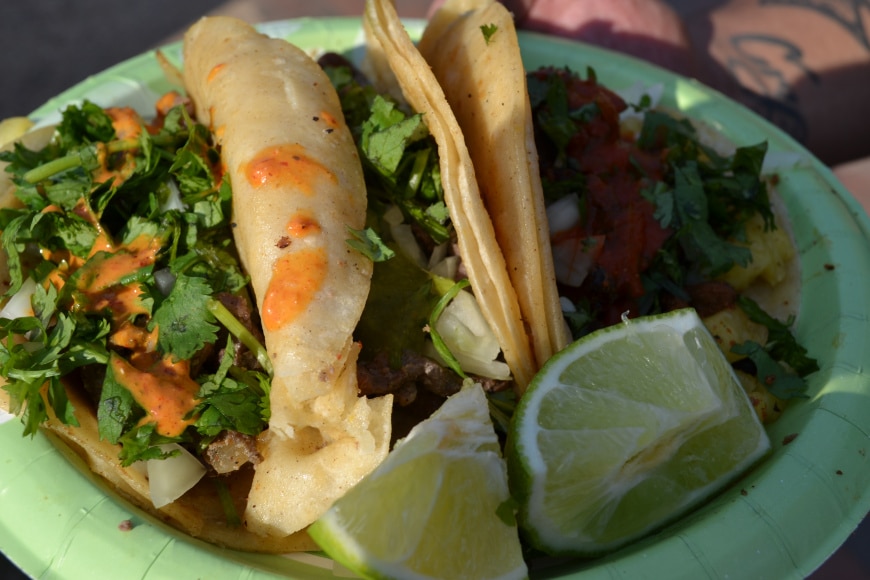 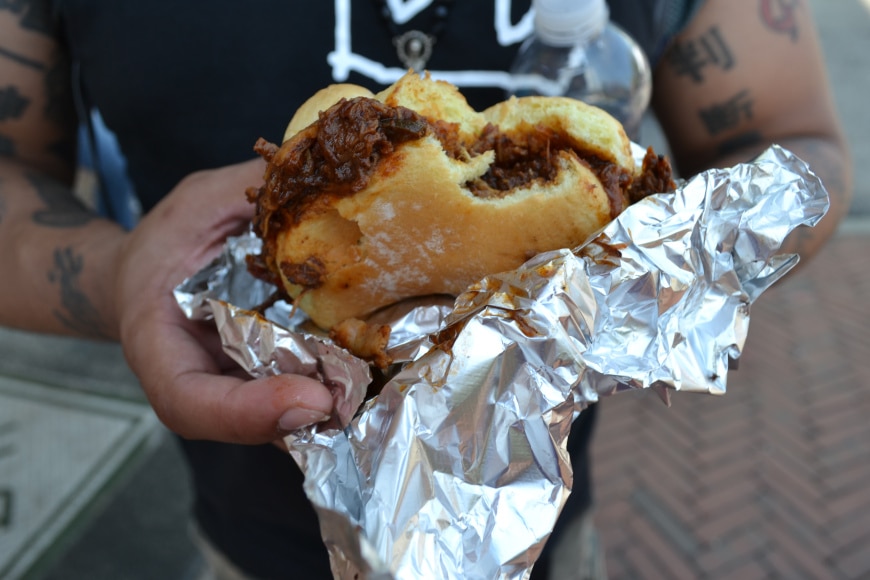 Hungry yet?  The Fells Point Fun Festival is an amazing weekend of food, fun, festivities, and more, and you’d do yourself a huge favor by planning a trip next year.  Baltimore is a beautiful city filled with vibrant people doing amazing things.  And the best part is, they don’t take themselves too seriously. 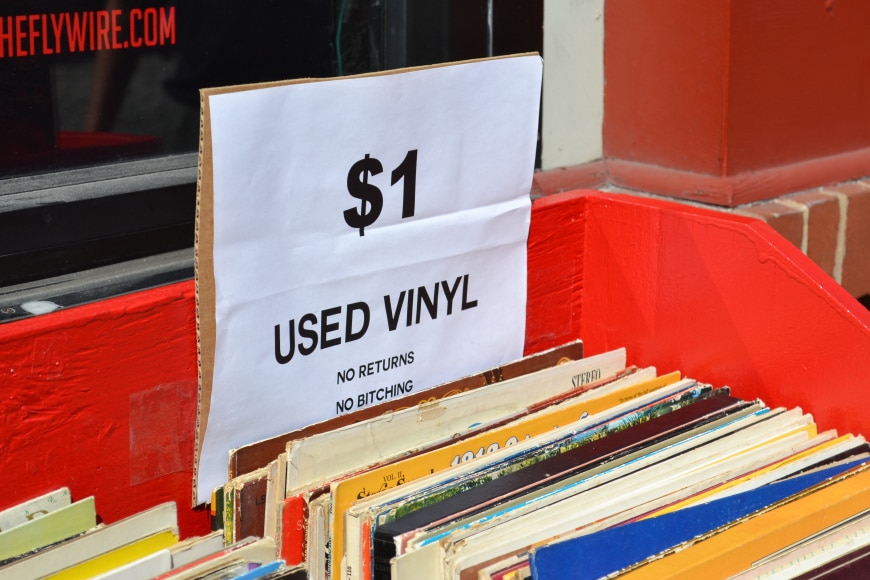 So it’s easy to see why “Charm City” stole my heart.  It’ll steal yours too! 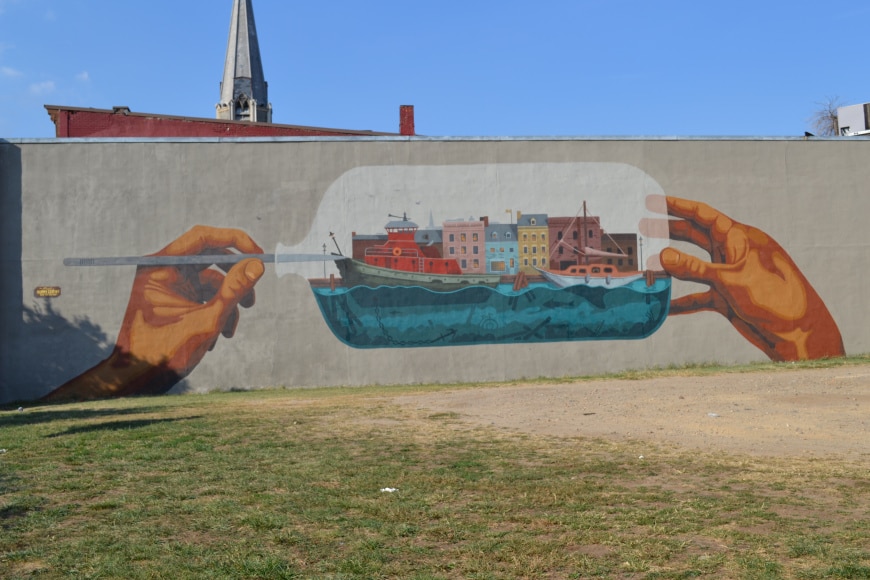 A Food Blogger’s Guide to Seattle

10 Dos And Don’ts For Attending Your First...