Caldo verde is a dish that takes me back to my childhood. I first had this soup as a kid, at my babysitter Florinda’s house.  She was Portuguese, and her kitchen was always filled with delicious smells and flavors.  I didn’t know what I was eating at the time, but I knew back then that it was damn good.  So after many years, I had this soup again as an adult at a local Portuguese restaurant, I finally learned it was called Caldo Verde!  This soup is super satisfying, and super healthy! It’s full of tons of kale, with just the perfect amount of salty, fatty goodness from Portuguese Linguiça.

What Is Caldo Verde?

What Ingredients Are In Caldo Verde?

Many variations of this Portuguese soup combination exist. Some use kale, while others use collard greens. Some include beans; others do not. Most call for a Portuguese hard sausage with a strong garlic flavor called Chouriço. Other recipes use Linguiça sausage. If you can’t find Portuguese sausage in your area, you can swap it with Spanish (cured) chorizo. Don’t use Mexican chorizo, it won’t work in this recipe.

How To Make Caldo Verde

In a large pot, saute the sliced linguiça until the fat renders out and it’s crispy around the edges. This gives the soup a lovely smoky flavor. After removing the sausage from the pot, add the onions, garlic, potatoes, most of the kale and broth. After the potatoes are cooked, simply blend the soup using an immersion blender or regular blender to give it it’s signature green color.

To finish the recipe, toss in the remaining kale and the cooked linguiça and simmer for 10 minutes to allow the kale the wilt and sausage to flavor the soup. Finally, taste the soup and add salt and pepper to taste. It’s so easy!

What To Serve With Caldo Verde?

This is a hearty soup, so it’s a meal in one pot. I would serve with some crusty bread for dunking. You can also serve this soup as an appetizer before a traditional Portuguese meal!

Can I Freeze The Leftovers?

Yes, this soup freezes well. To reheat, simply add to a pot and heat until hot. This recipe lasts 3 days in the fridge (if you don’t manage to eat it all)! 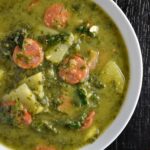